Tokens are the main piece of the Monopoly game using which you can play turns in the game.

The Monopoly game has evolved over the years and a lot of pieces have been introduced and removed from their versions of the game.

What is the battleship in Monopoly?

The battleship is a token mostly used by people of competitive nature.

They are more lethal while playing the game than others and make informed financial decisions based on mathematical calculations, not situations.

Players who choose battleship tokens usually are Passionate, Motivated, and Confident. (According to the post published on Monopoly Game Official Page on Instagram.)

Is there a battleship in Monopoly?

Yes, there is a battleship token in Monopoly. It is shaped like a Battleship which we see being used by the Navy.

This battleship token looks beautiful and comes made of metal in the Monopoly Game.

History About the Battleship Piece in Monopoly

Although Monopoly is not a wargame, it contains a token called battleship. However, the battleship is not an exclusive token for Monopoly.

The Parker Brothers used this token first in a game called “Conflict.”

But the game failed, and the makers shifted the token to Monopoly. This token is also used in another game called “Diplomacy.”

This was introduced in 1937 in the game. Since the inception of the battleship token in Monopoly, it is still maintaining its position in the game till now.

Was Battleship Part of the Original Monopoly Pieces?

Yes, of course, the battleship has been one of the six original Monopoly game tokens launched in 1937 by Parker Brothers.

Has the Monopoly battleship Model changed over the years?

The battleship model did not change over time, but its material underwent some changes. When it was first launched, the battleship was made of die-cast.

However, during the Second World War, metals became expensive in the USA, and manufacturers of the game shifted to woods.

As the situation normalized post-war, it returned to the die-cast model.

Do all Monopoly Versions have Battleship tokens in them?

The battleship is a part of the Standard Edition of Monopoly. It also there in 2017 Token Madness Edition and Monopoly: La que se avecina.

Battleship Token in Monopoly Junior vs. Other Versions

The Monopoly Junior was launched in 2014 with only four tokens: Dog, cat, car, and boat. Unlike the other versions, it does not contain the battleship token.

Yes, you can find Monopoly’s Classic Battleship token on Amazon. 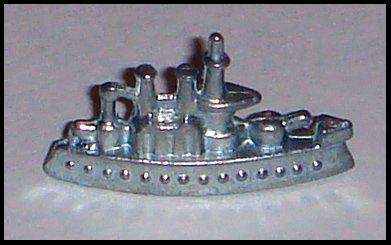 Let’s conclude the post on the Monopoly Battleship piece!

It’s a well-designed piece, especially for a battleship or warship lovers. This token is one of my favorites among the others.

I hope you enjoyed reading about this famous piece from Monopoly.