The Monopoly World Championship is an annual event that takes place in different locations around the world.

It is much of an interest to the Monopoly players and especially for the veterans. In this post, I would discuss about Monopoly World Championship, Dates, Venue, game duration, format, how to participate, and all you need to know.

Let’s get started to know more!

Is there a Monopoly World Championship?

Hasbro hosts an annual Monopoly World Championship. Once every four to six years, with increasingly longer intervals between tournaments since the inaugural one in 1973.

Because of the Coronavirus outbreak, the 2021 event was postponed. The previous competition was conducted in 2015.

The original plan for the Monopoly World Championship was to hold it once a year. Competitions were conducted regularly until 1975, but then they tapered off.

The Monopoly World Championships are an important (though lighthearted) competition. Many people compete at regional and national levels to earn a shot at the grand prize of being named the greatest Monopoly player in the world.

Learn some of the strategies used by the best Monopoly players by picking up the Championship Edition.

Who is the world’s best Monopoly player?

Nicolo Falcone, an Italian, is the current Monopoly world champion. Because he triumphed in the most recent competition, held in 2015, he is now universally acknowledged as the finest Monopoly player in the world.

At the final table, he bested Bjorn Halvard Knappskog, the reigning world champion.

Only two people from the United States have ever managed to win the title of world champion. Those triumphs occurred in the first two events when there were only four players total, and three of them were from North American countries!

Brian Nuttall, the reigning champion of Monopoly in the United Kingdom, was asked to compete in the inaugural Monopoly World Championship in 1973.

In 1974, an invitation was issued to Gyles Brandreth, a T.V. presenter and a former member of the British parliament. Brandreth had won the European championship the previous year and was also from the U.K.

After competing in the Monopoly World Championships in the 1990s. He decided to pursue a career in politics instead.

At this point, participants at the Monopoly Globe Championships have come from 63 different nations worldwide. This accounts for around one-third of the officially recognized nations that can be found throughout the globe.

As a result of the widespread coronavirus epidemic, a tournament scheduled to take place in 2021 has been canceled.

Over the years, additional rules for tournament play have been established to clarify some aspects of the official game rules and accommodate for discrepancies in those rules.

The following is a list of the past World Championships organized by year.

Nicolo Falcone took home USD 20,580 for his victory in the 2015 Monopoly World Championships, the same amount of money in the game since it was updated in 2008.

Each participant also receives a branded polo shirt, a tournament game set, a copy of the particular edition Monopoly game released for the 2015 World Championship, a copy of the game in Cantonese and Portuguese (the languages spoken in Macau), a Monopoly Deal game, and a speed dice and token box.

Instead of cash prizes, competitors in the inaugural Monopoly World Championships competed for a plaque honoring Charles Darrow, the game’s creator.

How do you enter the Monopoly World Championship?

You may check for press releases on the Hasbro website to see when the next round of official national and world championship Monopoly tournaments will be conducted, or you can sign up for their email alert of news or event to get the information directly in your inbox.

The producers of the Monopoly documentary that won an Emmy award, “Under the Boardwalk: The MONOPOLY Story,” have created a calendar that lists upcoming Monopoly tournaments and provides links to the websites set up in each country to support the next Monopoly World Championships.

This calendar is the best resource to use if information cannot be found from Hasbro. It is conceivable that further information or announcements of upcoming events might be obtained by getting in touch with the hosts of local competitions.

Classic Monopoly rules were used for competition in the World Championships every year from 1973 through 2004. Participants used just two dice and played under the standard Monopoly rules.

There was no incentive to land on Free Parking, and the game proceeded until all participants save the winner went bankrupt or the time restriction ran out. At that point, the unpurchased properties were auctioned off.

For games that ran out of time, the winner was decided by who had the most money after play. The new Speed Die was included in the regulations in 2009.

Due in part to this rule change, the actual final was the shortest in the World Championships’ history, lasting just around 42 minutes.

Spectators and viewers may not want to sit through a two-hour game. Therefore this shift was likely made to promote the new version of the sport and make the event more marketable.

There have been several changes to the structure of the world championship. Still, since 2000, things have settled into a reasonably stable pattern.

In 2015, a total of 28 competitors played in three one-hour, non-seeded, randomly-drawn rounds of the competition.

After the preliminary rounds, each player was assigned a point value based on their performance.

After the three preliminary rounds, the top 16 players in terms of points advanced to the semi-finals.

The semi-finals were ranked, and they lasted for 75 minutes. The results of the first round were used to determine the following:

The victors of the two semi-finals met in the championship match, which was scheduled to continue for two hours but ended up lasting just 47.

The victor, Nicolo Falcone, had advanced to the finals after placing 12th in the preliminary rounds and winning his semi-final on Table 4 by sending all the other players there bankrupt.

Like the original Monopoly game, the Championship Edition has a Speed Die and follows the same rules.

There’s a tutorial in the game for newcomers. The rules are given, but this is not a rule book. In reality, this article aims to help amateur Monopoly players play more like seasoned veterans.

The Championship Edition is a great way to expose novice or more casual players to the unique playing styles of those who have advanced to the final rounds of regional and national competitions.

In addition, a trophy with shiny chrome paint is included in the game as a reward for the victor. 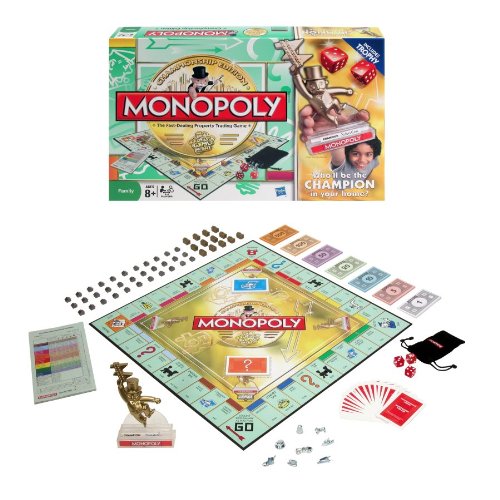 In addition to a rulebook, speed dice, and game pieces that let you play a quicker version of the game, Monopoly Family Championship offers the same feel as the classic board game while also allowing you to play in a shorter amount of time.

Other board games played with the whole family have left a sour taste in our mouths.

The components of board games are often made of low-cost and easily bent materials.

As per rules, there are a total of six players in Monopoly Champion Edition

Rules of the game

The rules and components of the Championship Edition of Monopoly are identical to those of the game’s classic iteration, including the Speed Die.

The exceptional quality of the manufacturing that went into the making of Monopoly: Championship Edition distinguishes it from other editions of the game.

The velvet bag containing the tokens and dice is included with the Championship Edition of the game, which has a better gameboard with metallic houses and hotels.

The game includes a walkthrough for players who are just starting. Although it contains the rules, this is not a rule book per se. In point of fact, this essay aims to teach newcomers to the game of Monopoly how to play more like seasoned pros.

The Championship Edition is an excellent tool for introducing inexperienced or less severe players to the distinctive strategies used by players who have made it to the championship rounds in local, regional, or even national events.

In addition, a trophy that has been painted with a beautiful chrome finish will be given to the winner of the game.